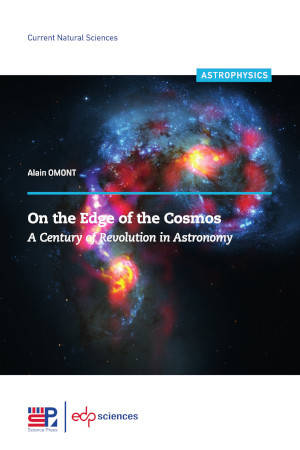 On the edge of the cosmos

On the edge of the cosmos

A century of revolution in astronomy

In a world where intergalactic wars are a common topic for movies, it is hard to imagine that the discovery of galaxies was made less than a century ago. In fact, it was one of the key astrophysical milestones of the first half of the 20th century, along with the revelation of the expansion of the Universe and the understanding of the source of the stars' energy.
The second half of last century saw the unexpected discovery of fantastic objects and extreme events in the Universe including neutron stars, black holes, radio galaxies, quasars, exoplanets, or stellar explosions. Modern cosmology was simultaneously established with the Big Bang model, leading to an astonishingly precise determination of the parameters of the Universe.
The author here retraces the adventure of twentieth-century astronomy and describes how it has changed our vision of the cosmos. By assessing the major successes of this undertaking and highlighting the fundamental questions that still remain, he puts into perspective the recent progress at the dawn of the new millennium including the acceleration of the expansion of the Universe and dark energy, dark matter, exoplanets, black hole mergers and gravitational waves, to name only the most spectacular discoveries. This book thus offers, in a concise and accessible form, a synthesis of our current knowledge of astrophysics, including many beautiful images from leading observatories.
S'identifier pour envoyer des commentaires.